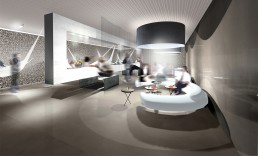 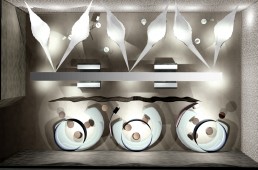 The place is conceived as a “domestic landscape” where to get rid of formalities and formalisms. The space of a daily indoor picnic where you can play, enjoy, read, talk, a place that can adapt itself to the diversity. Tastes and sensations that come from the renewed interpretation of a high level cuisine but freed by the preparation’s problems of great complexity and by the artificial shortcuts of flattened and “universal” flavors. Despite the English title, we can speak of Mediterranean culture of which we are interested, in addition of the ingredients, the ways of consumption, which add up the Spanish ritual of “tapas”, in that one of gastronomic trips on the south beaches, the modern standing dinners of vernissages, the new intimate and/or collective rituals, domestic, but not only, around the TV. 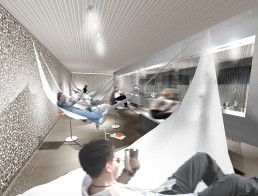